Why is it worth a long drive to visit Mt.Kangrinboqe in Tibet?

Known as the most sacred mountain in the world, Mount Kangrinboqe is a huge pyramid of unusual black rock that stands tall in the Gangdise Mountain Range in Western Tibet. The highest peak in the range, at around 6,638 meters above sea level, Mount Kangrinboqe is far from one of the highest mountains in the world, but has a significance that belies its smaller stature. Located in the Ngari Prefecture, close to the Chinese border with India, Mount Kangrinboqe, known in Tibetan as Gang Rinpoche and in India as Kailasa, lies around 1,211 kilometers from the Tibetan capital of Lhasa. A popular tourist destination, most travelers to Tibet heading for Mount Kangrinboqe tour, along the G318 Friendship Highway and the G219 National Road, which passes close by the mountain, between Kangrinboqe and Lake Manasarovar. Lofty Mt.Kangrinboqe at the backdrop of holy Manasarovar Lake.

The mountain also has associations with major religious figures in Buddhism in Tibet, including Padmasambhava, who is credited with introducing Buddhism to the plateau. It is also said that, in the 1th century, the Buddhist sage, Milarepa, came to Kangrinboqe to challenge the Bon mage, Naro Bon-Chung, and a great battle of magic was fought there over the site. The contest was eventually won by Milarepa, who it is said bequeathed the nearby mount Bonri to the Bon followers.

In the Hindu religion, the mountain is believed to be the home of Lord Shiva and his wife, Parvati. According to Hindu texts, the mountain is the Pillar of the World, and its four faces are made of crystal, ruby, gold, and lapis lazuli. The mountain is also the site of the attainment of Nirvana of the Indian Emperor, Bharata Chakravartin, after whom ancient India was named as Bharatavarsha. 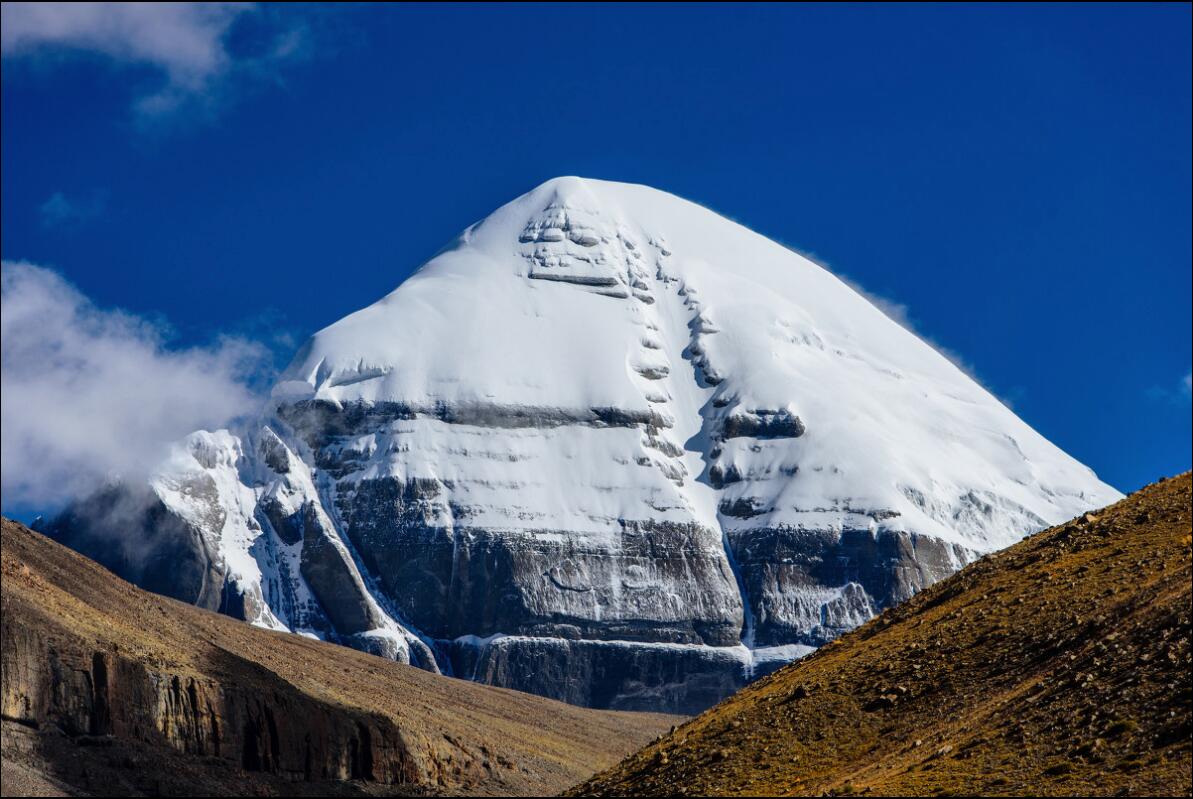 In Jainism, it is said that the first Tirthankara, Rishabhadeva, attained nirvana on Ashtapada, the mountain next to Kangrinboqe, and that Mount Kangrinboqe is the representation of Mount Meru. In the Jain traditions, the last Tirthankara was taken to the summit of the sacred mountain after his birth, to be bathed in the snows of the summit and anointed with precious oils.

The Bon religion, which is the original religion of the plateau, believe that the mountain and the entire region around it are the gateway to the spiritual realm known as Tagzig Olmo Lung Ring, at which lies the central mountain of the universe, the four-sided Yungdrung Gutsek.

Experience the 3-Day Kora around the Mt.Kangrinboqe

This sacred mountain is one of the few places in Tibet where mankind is not permitted to tread, and aside from the legends of Bon-Chung, Milarepa, and the Jain Tirthankara, no mortal man has ever set foot on the slopes and summit of the mountain. However, there is a sacred kora route that circles the mountain, which is one of the most sacred pilgrimages one can make in Tibetan Buddhism and Hinduism. 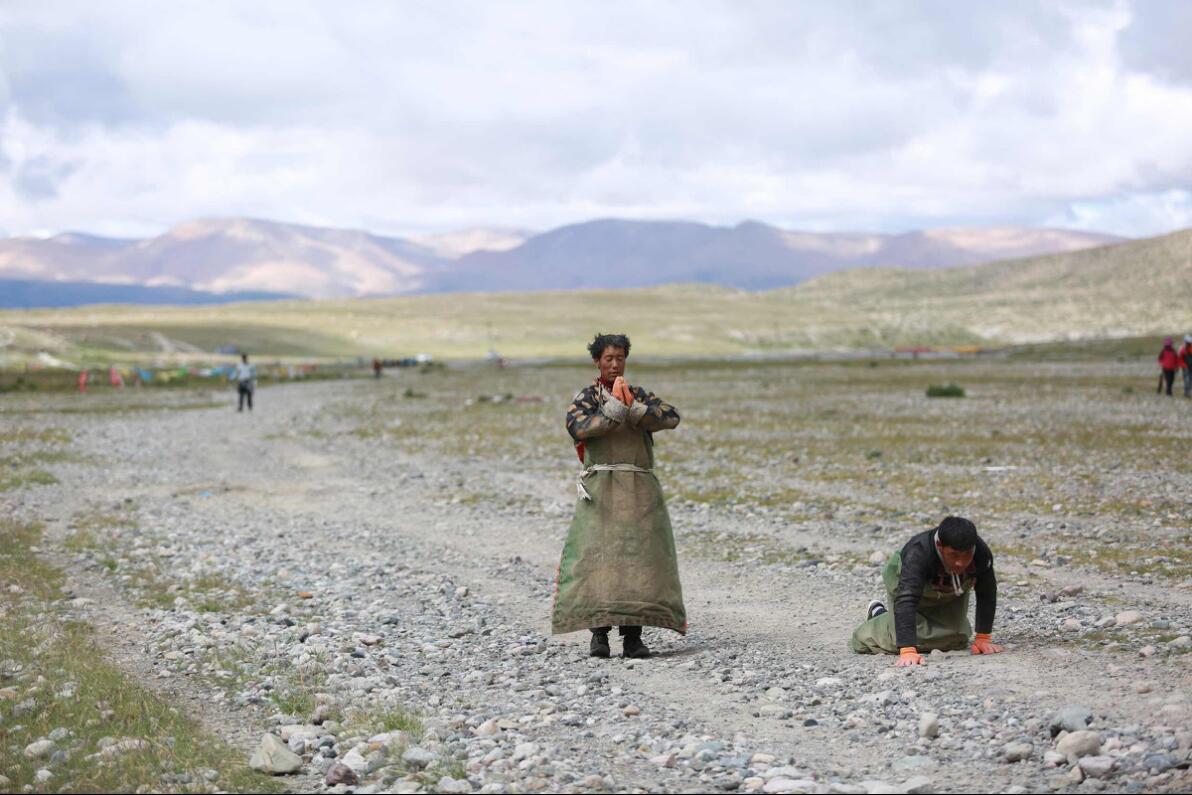 The prostrating Tibetan pilgrims along the kora route.

The kora route is also the number one trek in Tibet, and the 52-kilometer circuit of the sacred mountain is an intense three-day trek for tourists to the region. Starting at the small village of Darchen, the trek follows the kora route first west, then north into the valley that runs below the western face of Mount Kangrinboqe. The first night is spent at the Drirapuk Monastery, after which trekkers head up a steep climb to the famous Domla La Pass, at an altitude of 5,630 meters. After the pass, trekkers head down as far as possible before stopping for the night, usually around the Dzultripuk Monastery in the valley below the eastern face of the mountain. The final day is the shortest, taking trekkers back around the southern face to Darchen and the end of the trek.

Other Travel Tips for Mt.Kangrinboqe Visit

Traveling to Mount Kangrinboqe is one of the most spiritual experiences in Tibet, and even non-Buddhist trekkers feel a sense of awe in the shadow of this most sacred mountain. Trekking around the mountain often brings tourists into close contact with the pilgrims that can be found making their way around the kora route throughout the year. As one of the most amazing treks in Tibet, the route around Mount Kangrinboqe is more than just a hike around a mountain, but a feat of endurance and perseverance, the culmination of which is one of the best feelings in the world.

Whether you are traveling to Tibet for trekking or just for the stunning landscapes and monasteries, Mount Kangrinboqe is well worth the long trip out into the remote and desolate western hinterland of the plateau. Not only is it the best trek in Tibet, but it is one of the most spiritual places in the world, renowned in four separate religions as sacred, and the center of the universe according to their beliefs. These beliefs are something to be respected, and if there is a chance to head out to Mount Kangrinboqe, you would not regret taking the long trip.