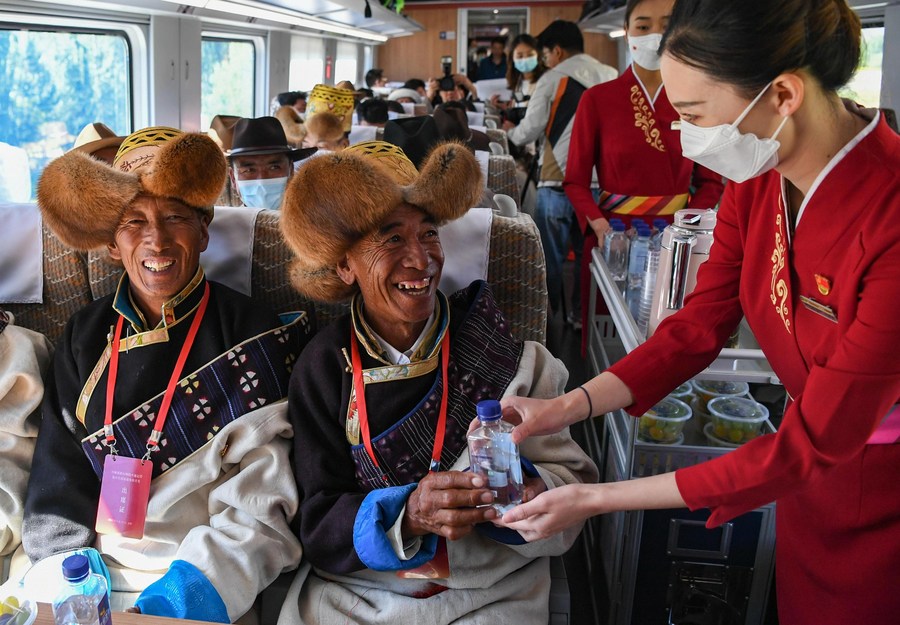 Jan. 10, 2022 -- The Tibet autonomous region saw steady economic growth in 2021, with GDP reaching 200 billion yuan ($32 billion), an increase of about 7 percent over last year, Yan Jinhai, chairman of the regional government, said on Tuesday while delivering the government work report to the fifth session of the region's 11th people's congress.
Over the past year, the per capita disposable incomes of urban residents increased by 13 percent and those of rural residents 14 percent, ranking first in China's western regions, Yan said.
The added value of industries above a designated size increased by more than 11 percent in 2021, while the retail sales of consumer goods rose by 10 percent.
"The region's economic development maintained good momentum in 2021. It did not report any cases of COVID-19, and the operation of the market was stable and orderly," Yan said.
With infrastructure upgrades－a highway between the capital, Lhasa, and the city of Nagchu in the north was opened－almost all townships and villages between the two places have become accessible by road, with highway mileage exceeding 120,000 kilometers as of the end of last year.
The Lhasa-Nyingchi Railway started operation in June, linking the regional capital to Nyingchi via Lhokha and permitting Fuxing bullet trains to operate on the plateau for the first time.
Yan said that this year the region expects to see GDP growth of 8 percent, as well as per capita growth in disposable income above 8 percent for urban residents and above 10 percent for rural residents.
"We will continue to work hard to keep the region's economic progress within a reasonable range," Yan said. "We will maintain a stable and healthy economic environment."
Kalsang Drolma, an economist at the China Tibetology Research Center in Beijing, said the region's GDP reached 100 billion yuan in 2015, and the fact that it has attained growth of an additional 100 billion yuan within just six years is a miracle.
"These figures reflect the growing trend of Tibet's economic development despite the impact of COVID-19, which is ravaging the globe. It also shows that Tibet is on the right track of following socialism and a modernized development path with Chinese characteristics and demonstrates the region's unique features," said Kalsang Drolma.
Financial support from the central government is the main force driving the breathtaking transformation, investment in fixed assets also remains important, and the efficiency of making such investments has risen, she added. "Another driving force behind Tibet's positive economic growth is the growth of consumption.
"The economic structure is being continuously optimized, characteristic industries continuously upgraded, and more energy has been released to promote the transformation of the region's economy from high volume to high quality," she said.
Tenzin Dondrub, a Tibetan resident of Nagchu city, is a barometer of the region's rapid economic and social development, and he praises the changes to transportation over the decades.
"Two decades ago, without a railway and proper highways, it took more than 8 hours from my hometown Nagchu to the regional capital Lhasa, and roads were terrible," the 56-year-old said.
"After the start of railway and highway services in recent years, it takes less than four hours, and is much faster and safer now," he said. "I work in Lhasa, but I return home more frequently now as it is more convenient."


New Tibet chairman elected
Yan Jinhai, former acting chairman of the government of the Tibet autonomous region, was appointed the region's chairman at the fifth session of the region's 11th people's congress on Friday.
On Oct 8, at a conference of the standing committee of the region's 11th people's congress in the capital Lhasa, Qizhala's request to step down from his position as the chairman of the region was accepted.
At this conference, Yan was appointed as the region's vice-chairman and acting chairman, and Yan was accredited with the letters of appointment.
An ethnic Tibetan, Yan was born in 1962 in Northwest China's Qinghai province, and has been working for almost four decades in Qinghai including in schools, educational institutions, government prefectures, and as deputy head of Qinghai.