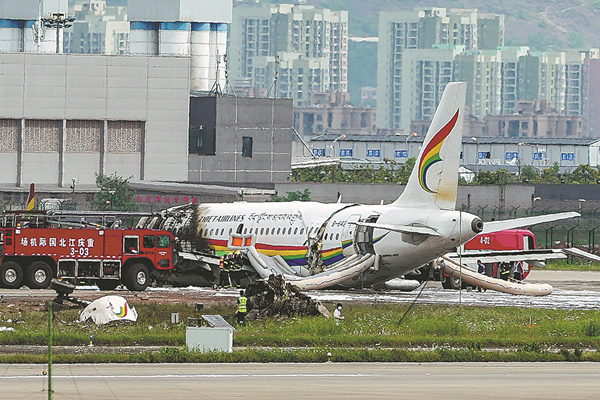 A passenger jet is damaged by fire after veering off the runway during takeoff at Chongqing Jiangbei International Airport on May 12, 2022. Thirty six people were slightly injured in the incident. A total of 113 passengers and nine crew members were on board the aircraft. [Photo by Liu Chan/Xinhua]
Thirty-six people were slightly injured on Thursday in Chongqing when a plane veered off a runway during takeoff and caught fire.
Tibet Airlines Flight TV9833 went off the runway at 8:09 am at Chongqing Jiangbei International Airport, and the left side of the plane caught fire, airport sources said.
The Airbus A319 reportedly had been in service for nine-and-a-half years.
All of the 113 passengers and nine crew members on board the aircraft, whose destination was Nyingchi in the Tibet autonomous region, were evacuated. The injured passengers, most of whom were slightly hurt during the evacuation itself, were taken to a hospital.
According to the Civil Aviation Administration of China's Southwest Regional Administration, the flight crew reported that the aircraft displayed some abnormalities during takeoff, so the pilot immediately aborted the takeoff according to safety procedures. At that point the plane veered off the runway, and an engine caught fire after scraping the ground. The fire was eventually extinguished.
The cause of the accident is under investigation.
"I heard some unusual noise when the flight was taking off," Long Anquan, a passenger on the flight who said he flies frequently for business trips, told China News Service. "One to two seconds later, the aircraft body tilted sharply."
He said that although he braced for impact－with his head down and both hands firmly holding the seat in front of him－his waist and abdomen were slightly injured due to the impact.
"I am so lucky," Long said, "I might have used up all the luck of a lifetime."
The CAAC Southwest Regional Administration and local authorities immediately launched an emergency response, with rescue, public security, fire and medical personnel rushing to the scene.
One runway at the airport was closed after the accident, but two others remained open for takeoffs and landings.
Palden Nyima in Lhasa contributed to this story.

By TAN YINGZI and DENG RUI in Chongqing